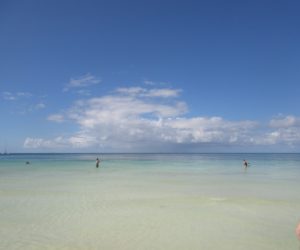 My second time to Cuba, i really wanted to show Chris the beautiful island of Cayo Blanco so we booked a tour.

We boarded the giant catamaran and grabbed a cocktail.  We laid out at the front of the catamaran to sunbathe while taking in the beautiful view.

There was a short stop in the middle of  the seas to do some snorkeling.  The waters were calm and you were able to see a few fish, but a couple people on our tour were stung by jellyfish so we quickly got out of the water and back on to the catamaran.

Our next stop was over to Cayo Blanco for lunch.  I’d been there last almost 7 years ago and it was an untouched paradise.  I brought Chris hoping to show him what I saw.  When we arrived, it was completely different.  They’ve commercialized it 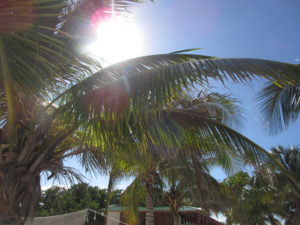 more.  Many other catamarans stopped at Cayo Blanco at the same time as us.  It seems that there’s a steady rotation of tourists coming in a few hours at a time.  They’ve built a new undercover area where they offer a buffet lunch.  They funnel everyone from the catamarans to this area to stand in line for lunch (which takes up a bit of your time on the island), then you take time to eat.  In Cuba, unless your eating authentic Cuban food, the day to day food at the resorts aren’t always the best.  The buffet food here was pretty good.  They had a variety of options. There were bars set up on the beach which is also a new addition.  Even with all these changes the beach itself is simply stunning.  Chris hadn’t seen it before and having nothing to compare it to, he was blown away  by it.  It really is unreal.  The downside to it is that I feel that the tour doesn’t leave you enough time to explore the beach.  When you’re at a beach so beautiful you want to be there for more than just a few hours (especially when most of the time gets eaten up by standing in line and having lunch).  It was time to leave before you know it. 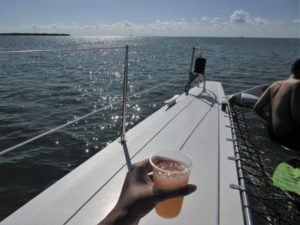 Our next stop was to a barge for a dolphin attraction.  Cameras and phones are not permitted in this area.  They have us go down to where we meet a dophin.  In this case we met adorable Oscar.  Oscar gave us kisses, high fives and had a number of other interactions with us.  It was pretty cool.  For a few extra dollars, you have the option of swimming with Oscar.  Chris opted to do this and wouldn’t stop talking about it for weeks afterward.  It was a highlight for him.

Following the dolphin attraction we all boarded the catamaran one last time to head back to the pier.  The captain and the rest of the staff on the boat were so awesome.  The cocktails were flowing and they had every last one of us dancing.

The whole day was so much fun.