Takashi Murakami: The Octopus Eats Its Own Leg 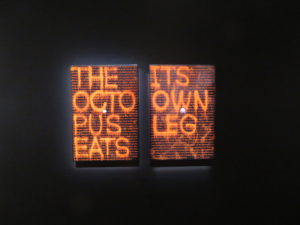 On Tuesday evening Chris and I ventured over to the Vancouver Art Gallery to check out Takashi Murakami’s art exhibit and take advantage of the gallery’s “by donation” night.  The line-up outside went down the street and around the block.  We decided to come back another time as it was obvious that this was not an exhibit to miss.  So we returned on Friday evening to check it out.

Before seeing this exhibit, I’ll admit that all I knew about Murakami was that he had done some album cover art for Kanye West.  I’d also seen some of his work on social media and thought it was bright and fun.  He’s one of those artists that has dipped his feet from the art world into the world of popular culture.  I’d walked past the art gallery plenty of times since the exhibit began and I loved the outside display and the name “The Octopus Eats It’s Own Leg” so my interest was piqued.

Walking through the entrance to the stairwell – all I can say is wow.  You’re immediately drawn in.  It’s fun and 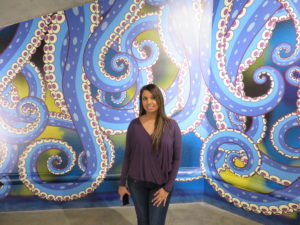 bright and whimsical.  I love the urban feel of the sculpture covered in spray paint.  The exhibit takes up the entire second floor of the gallery.  Now, I am in no way an art critic.  I’m married to an artist and I love all creative things, but I am no expert in art and so for the normal civilian, this was a great exhibit that pulled you into Takashi Murakami’s life through his craft.  It brings you through three decades of his career and although most of what I’d previously seen was happy, there were darker elements present throughout the show.  You can see how he’s changed through the years as his pieces are so different from one another – from happy animated characters, to buddhist monks to sculptures of creatures.  We came across the album art he’s done for Kanye West and had some fun taking selfies with the “drop-out bear” sculpture.  There is such detail in all his paintings, it’s really quite unbelievable.  The sizes of his pieces are overwhelmingly gigantic.  The whole exhibit is just a rave for your senses.  It’s fantastic and one I would definitely recommend. The way this exhibit was tied together was so smart.  30 years of this mans work, the different styles he’s touched on and the ups and downs of his life fit so great with the meaning behind the sub name of the exhibit “…a situation in which one survives in times of duress by feeding on or sacrificing oneself.  The octopus eats its own leg to survive, but does so knowing the tentacle will regenerate.”  Resilience…. 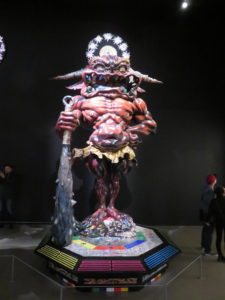 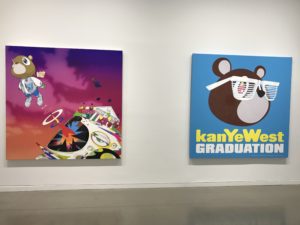 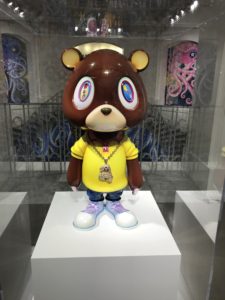 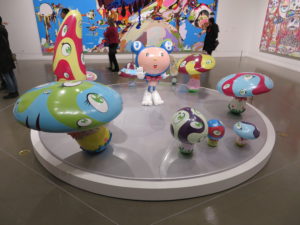 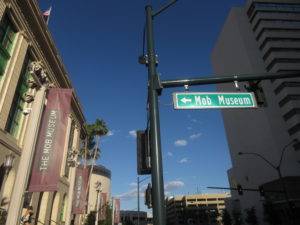 When we were in downtown Las Vegas, we popped into the mob museum.  Three floors of awesomeness.  I wish we were able to spend more time there, but we had a plane to catch.  A big highlight for me was the courtroom on the 2nd floor.  So cool.  You think you’re walking in to just watch a video, but instead you get an unique interactive experience.  I don’t want to give away too much, but it was a pleasant surprise.  Other interesting parts throughout the museum were the electric chair and the blood stained wall from the St. Valentine’s massacre.  My husband’s favorite part was the tommy gun that you could shoot.  I loved reading the true stories behind mobsters that we’ve seen in many movies such as Casino.  I had a great time.  I would love to go back and explore it further. 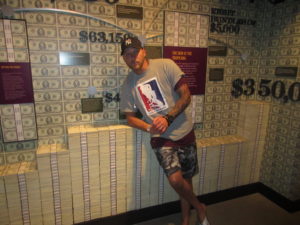