Mamma Mia! at the Stanley Theatre

On Tuesday evening, my mother-in-law and I headed over to the Stanley Theatre to check out the play “Mamma Mia!”.  I had actually never seen the show or movie before, so I was completely new to the story.  As I sit here writing this, I’ve got the movie on in the background so that I can compare just how true to the story the performance we watched was.  So far, pretty spot on.  Everyone has heard of Mamma Mia, the musical that uses the music of Swedish pop band, Abba, but not being too familiar with the story I had no idea what to expect.  What we got was a wonderful evening filled with hilarity, great music, spectacular singing and dancing.  It was just a very fun, upbeat show.  I really enjoyed myself.  My mother-in-law, who is Swedish, was filled with nostalgia listening to music that she used to listen to back home, often enthusiastically singing along.  She really enjoyed herself too.  I feel it was a show great for all ages.  I’ll admit, at times I  did feel that there was some over-acting, but that is sometimes expected in theatre. The actors knocked it out of the park.  (Kind of a side note, but I thought that Donna kind of resembled Jennifer Aniston and Rosie resembled Melissa McCarthy a bit.)  The set was beautiful, the costumes were bright and fun, the set changes seamless.  I was very impressed.  What a great show.

The show runs this summer until August 12.  Will you be checking it out this summer? 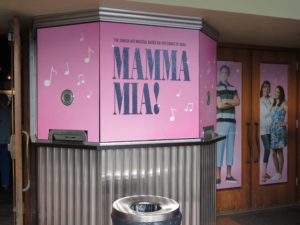 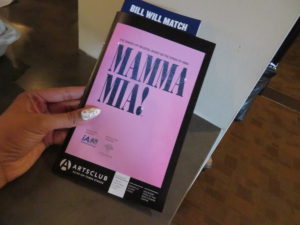 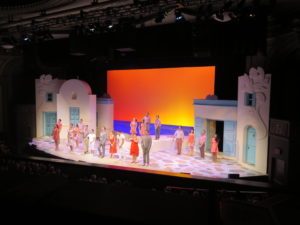