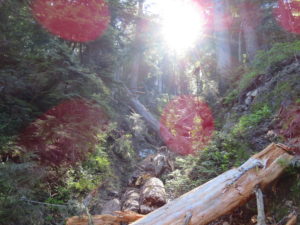 What better way to celebrate Canada’s 150th birthday than exploring beautiful British Columbia.  My husband Chris and I woke up early on Canada Day to drive over to Cypress Mountain to do the hike to St. Mark’s Summit.
Now I wouldn’t call us hikers really, but we were determined to try this one out after hearing how beautiful the view was.
We got out of our house pretty early with backpacks full of water, snacks and a pre-packed lunch.  The drive to our destination was about 30 minutes from downtown Vancouver.  When we arrived there were groups of people looking at maps all working toward the same goal as us, but we all seemed equally confused as to where the trail started. Finally, after asking a group of people in the parking lot, we learned that we (and the other group of people we were speaking with) were on the wrong side and we headed over to start the trail.  I really wish the start of the trail was clearly marked. Getting started was confusing.  However, the helpful people we met told us that we needed to start on the Howe Sound Crest trail and it would eventually leads us to St. Mark’s Summit.
We began our hike in high spirits stopping to take photographs of ponds and prettiness.  As we ventured further in, the incline began.  Not too fun,but it was expected.  What was surprising to me was after we were a fair bit of the way in, there were sections covered in blankets of snow.  Perhaps about half of the trail in different sections was this way.  I wasn’t expecting that on July 1. It was good lesson for me.  Again, as we aren’t avid hikers, we were wearing runners and when we got to the snow sections it was quite slippery.  Everyone was falling.  As we got closer to the top it became much more steep and there was much much more snow.  It was very difficult without the correct shoes on.
When we finally arrived at the top it was gorgeous!  I do wish it was a little less crowded as it was hard to take photographs of that stunning view or get close to the front as there were people everywhere.  We found a nice spot and sat down and had lunch and enjoyed the beautiful view as cute little chipmunks ran around us.  It was so fantastic. 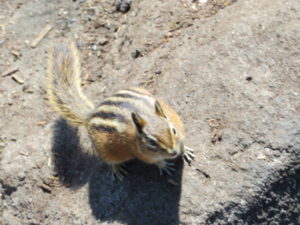 After spending about 45 minutes at the top, we started on our way back down the mountain.  Dreadful.  The way down the mountain in the snow made us both miserable. There was a lot of sliding, falling and cursing.  I have to say that there was sense of camaraderie with all the hikers as several people would fall or be trying to balance in the snow. It was comical and fun.  On the other hand there was a section that I was extremely worried and nervous about.  There was a creek covered in snow and you had to cross in the snow to get to the other side, but there were sink holes and when you looked down into the sink holes you could see the far fall down to the creek.  I felt such fear crossing this area.  On our way back there was gentleman crossing with his poles right before us and as he crossed more of the snow fell after him to reveal more holes.  My husband and I slowly made our way across, but I was scared.  My shoes were slipping in the snow and I just kept thinking that if my shoes slip there I go right into the sink hole and into the creek.  I think they should consider making a little bridge over the creek.
My husband and I were hating it towards the end with our shoes covered in mud and filled with creek and swamp water and our hands and butts frozen from sliding down the mountain in the snow.  My husband, although he was super sweet and helped me up each time, made a little game of counting my falls.  The final count was 13 hard falls in the snow. The number is so high it almost sounds like an exaggeration.  But alas it’s not lol.  I have a giant bruise on my butt to prove it.
As we got closer to the end, we started to turn into our happy selves again. We ended as we started, snapping pictures and full of smiles.  As we made our way through the parking lot we felt amazing to have finished it, but we were just so focused on getting home that perhaps it didn’t hit us right away.
Once we were home and all cleaned up, we both chatted about how amazing we felt to have accomplished it.  We both agreed that it was actually a lot of fun.  I feel like it’s normal for (some) people to hate the work out while you’re doing it, but love it afterwards.  Maybe this can be compared to that feeling?
Would i recommend it?  Yes.  But I would say to keep these tips in mind:

It is beautiful, a great work-out and fun with the right company.  It’s worth it. St. Mark’s Summit is such a local gem.