May 9, 2018 By therdizzle in Eateries No Comments 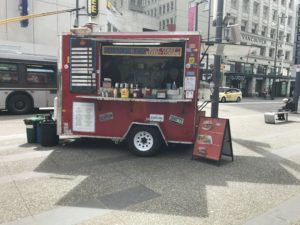 I’ve walked past the Kaboom Box food truck on Granville Street millions of times with great curiosity.  Before lunch today, I was craving some fish and chips so I decided today was the day I would give it a shot.  I walked up to the food truck and took my first close look at it.  It’s not as nice, new and flashy as some of the other food trucks I’ve seen around town  The menu looks a bit worn and faded, but still seemed interesting enough.  They market themselves as “West Coast Street Cuisine”.  I had every intention of ordering their fish and chips which looked very appealing in their photographs , but as I approached the front of the line I blurted out “oysters and chips”.  It had piqued my interest and this happens to me sometimes, haha.  My meal was ready pretty quickly.  It was a generous portion for $12.00.  It looked terrific and I was excited to dig in.  The fries were easily the highlight of the plate.  They were crispy and salted to perfection.  The fried oysters had a crispy batter, but I found them to be a bit on the greasy side.  They were good, but not amazing…I’ve had better.  The homemade tartar sauce was really delicious.  Unfortunately, the cole slaw was fairly underwhelming.  Overall, my experience  was just okay.  I don’t think I’ll be back. 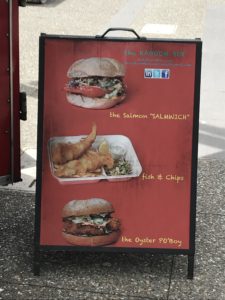