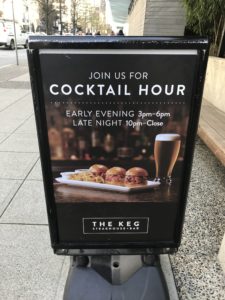 It was a beautiful day in Vancouver today.  After work I met up with my husband to take in some of the beautiful weather.  While we were out and about we thought we’d grab some dinner.  We walked by the Keg on Alberni Street and they were still having their cocktail hour so we decided to go check it out.  The Keg is a very popular steakhouse that I’ve been to a million times, but this was my first time ever going for happy hour.  Caesar cocktails are on for $5.00 and no one does the Caesar better than the Keg.  They have three starter items on their menu – prime rib sliders, calamari and nachos.  We went with the sliders and the nachos.  The nachos are huge – we didn’t get close to finishing them. They taste like nachos you would get at any pub or bar.  They were good, but nothing special.  The prime rib sliders were soo good.  No doubt that the Keg obviously knows how to do their meat.  Soft bread and tender prime rib with horseradish and au jus.  Mmm mmm mm.  On our last slider we found something that seem to look a bit like a thread or something similar that we couldn’t quite put our finger on, we brought it to our waiters attention and he instantly took it back to the kitchen.  They figured out that it was actually a piece of bean sprout.  This made sense – it did look like that. The manager came over to apologize as it didn’t belong in the sliders and he took it off our bill.  I honestly did not think it was a big deal as things like this happen once in a while in a kitchen.  I was impressed that they dealt with it quickly and professionally.  The Keg will always be a favorite spot for me, but I think I prefer the dinner menu rather than the cocktail hour menu. 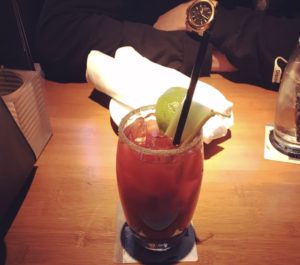 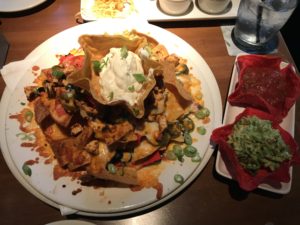