This past year I was lucky enough to cross the Yi Peng Festival off my bucket list.  For those who are unfamiliar, Yi Peng is a festival that takes place in Chiang Mai, Thailand in November each year.  We ventured away from our hotel and headed over to the area where the festival is held around 5 p.m.  As soon as we pulled up there were crowds everywhere, people selling lanterns, vendors selling trinkets, and tons of street food.  There was a sectioned off area that resembled a carnival of sorts for children.  We wandered around sampling eats and purchasing our lanterns.  Yi Peng coincides with Loy Krathong which is another festival in Thailand where locals set off candlelit decorated baskets into the river.  We also picked out a floral basket to light up and release into the water during this time.  It was a lively scene and you could feel the excitement in the air.  At around 7 p.m. thousands of people gathered on to Nawarat bridge to light their lanterns and release it into the sky, releasing with it all the negativity from the past year and making their wishes for the future.  Right before 7 p.m. there were just the odd few lanterns being lit and released.  Some people were letting their lanterns go way too quickly and the lit lanterns were falling into the crowds as people pushed them back into the sky – the crowds cheering as the lanterns made their way to take-off.  As 7 o’clock hit, people began to release their lanterns into the sky.  Lanterns were also falling into trees and burning, 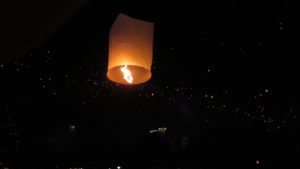 falling straight into the river and the ones that were being let go in the middle of the bridge rather than the edge of it were making their way right into people.  It was quite scary at times, with lanterns coming from every which way there were several moments were lanterns were heading straight into me.  I also left the event with a slight burn on my forehead from a lantern that burned into a tree above me.  The ash fell straight from above onto my forehead…ouch.  Chris and I took a bit of a break in the middle to have some dinner and drinks as it seemed to be straight chaos and we wanted to get out of it.  When we left the pub, the sight before us was unbelievably beautiful.  It had gotten even darker and the lanterns completely filled the night sky.  The river was loaded with illuminating floral baskets.  It was so stunning.  One of the most gorgeous sights I’ve ever seen.  Chris and I went to the edge of the bridge and lit our lanterns one by one, made our wishes and released them into the sky.   We watched as they slowly floated above us and joined the thousands of others.  We wandered the streets afterwards taking photos and videos (none of which do the experience any justice), talking to people and just taking it all in.  The night ended with a gorgeous display of fireworks.  I felt like I was in a dream.  I feel so blessed to have had this experience in my lifetime.  It’s one I will definitely always look back on as being one of my fondest memories.