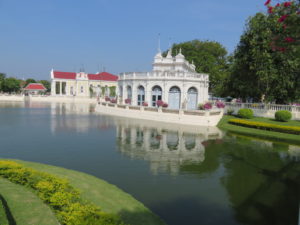 While in Thailand, we decided to do a tour of Ayutthaya.  We were picked up really early by shuttle and driven to another location where we boarded a large tour bus and began our very long journey from Bangkok to Ayutthaya.

To those who are unfamiliar, Ayutthaya was once the capital of Thailand.  It’s downfall came after a war against the Burmese in 1767 left it in ruins.  This tour promised an opportunity to learn the history and explore.

Our first stop was the Summer Palace.  This is a beautiful palace complex that was formerly used by Thai Kings.  The Summer Palace is governed by it’s own rules.  I was told that there could be no skin showing at the temples so I was wearing a t- 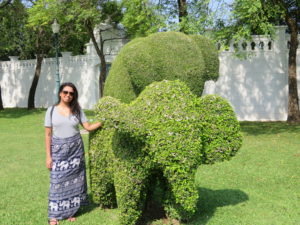 shirt with long yoga pants.  Once I arrived I was advised that my outfit wasn’t acceptable for entry and was asked to purchase a skirt to go over the pants upon arrival.  Many people on our tour were asked to do the same for different reasons.  I found a wrap skirt that was cute and cheap, so I didn’t mind.  We spent about an hour here with about 15 minutes of solo exploration time.  The landscaping and gardens are beautiful and impeccably well kept.

Our next stop was over to the Ayutthaya ruins.  This was easily my favorite part of the day.  Ruined by time, fires and war – this is a sight to see.  A very popular Thailand image – the Buddha head entwined in the roots of a Banyan tree can also be found here.  There is a feeling of peace that I felt exploring the ruins.

The next stop was the Wat Naphrameru.  This is the only temple in Ayutthaya that was not destroyed.  I’ll be honest, after a couple days of seeing temples this wasn’t anything amazing to me.  At this point, we had spent so much time in the scorching hot sun and on the tour bus that the day was starting to feel a little long.

Our next stop was a short stop at the Reclining Buddha.  Although the grounds are not very well maintained, it  was still worth seeing.  The people selling flowers near the Buddha can be a bit aggressive. 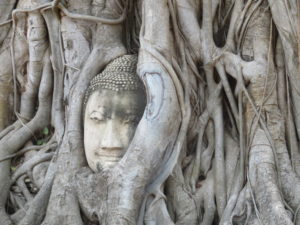 Finally our last stop was the White Orchid River Cruise for lunch and to cruise the Chao Phraya River.  At this point we were starving.  Food was plentiful with a great variety.  Everything was delicious.  After eating, we relaxed by the window and took in the views.  This cruise went a little too long for my liking.  I may have just felt this way because the day was so long and we’d also done a tour of the same river the day before, but I think we were ready to go home not long after eating and this cruise went on hours after food was served.

I think it’s important to visit the Ayutthaya ruins to understand the history and to see it once in your life.  I don’t think it’s necessary to do a full day tour with so many stops as a lot of the other stops were not needed. 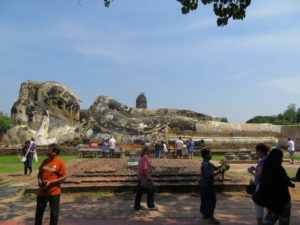