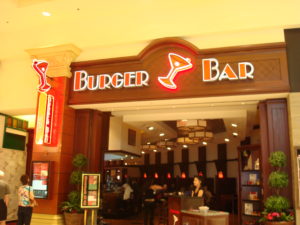 Since both Chris and I are foodies, we wanted our wedding dinner in Vegas to be at a casual yet delicious burger joint.  We went wit Burger Bar.  This is the restaurant of celebrity Michelin Chef Hubert Keller and it was our first choice right from the get-go.

When setting up details, we dealt with Rachel by email.  She was very professional and we set up our menu with our logo on it which was nice and decided it would be cash bar at this portion of the night as we would be having booze at the portion before dinner and an open bar for our party right after.

On the day of the wedding, we arrived and we were seated in a long table in the centre of the restaurant.  It was a casual pub vibe.  When we sat down there were appies already on the table and they were delicious.  Everyone was starving at this point in our day so that made everyone happy.  Our menu was on the table with our logo.  So cute.  It was cool walking through the pub and having people cheer.  It was just the kind of feel we wanted for our day. It was a fun atmosphere.  Everyone cheered when we walked in which was awesome.

My groom and I arrived a few moments later than my party as our photographer was taking pictures of us on our walk to burger bar.  The guests were aware that it was cash bar for this portion of the evening and while some of the guests were using this part of the night as a breather, the ones who decided they would have drinks were willing to pay.  I don’t feel it is my responsibility to explain how it works with billing at the restaurant especially on my wedding day. They wanted the guests to pay for any drinks at the bar in order for it to be cash bar, but the staff took drink orders at the table.  I feel I made the arrangements with them and it should have been explained to my guests how the business works when there is a cash bar.  At the end of the night, the drinks were on our bill because people ordered at the table. When I asked them to just bill people for their drinks, they told us that they could not issue more than 8 bills for a table (this was on my contract with them) and it would have only worked that way if people ordered at the bar, they said they could issue one bill for the booze and one for the food and we could pass the booze bill around for our guests to figure out what they owe.  We thought it was insensitive of us to ask our guests to go through one receipt (not to mention it’s embarrassing) and figure out what they owe, plus we had an after party to get to.  We paid for it, but when I spoke with Rachel about it she mentioned that she didn’t charge us for the people that didn’t show up.  We had just one guest that didn’t end up flying to Vegas for the wedding.  Paying for his meal would have been fine because it was calculated into our wedding budget.  Picking up the liquor tab for our guests did cost more than the one meal.

I also requested for a vegetarian burger to be added to my menu.  We had a guest who used to eat meat, but is now a vegetarian.  The vegetarian burger was not added to our menu.  He didn’t want to inconvenience anyone, so he ordered a beef burger.  I unfortunately did not notice until after he ordered and at that point he said it was fine.  He hadn’t eaten beef in years.  He left our after party early as he wasn’t feeling well.

I had talked to Rachel prior to the wedding to have bacon taken off the chicken burger as a lot of our guests that eat chicken do not eat pork (including myself). She mentioned that guests could just order it without the bacon so we left it on the menu.  At the table, my food was almost brought out to me and then it was realized that there was bacon on the burger.  It was taken away.  All my guests were already eating.  A second burger came out also with bacon on it.  I explained I ordered it without bacon and so the burger was taken away, the bacon was picked off (something I could have done myself if I was fine with that) and brought back to me instantly.  That was not cool and I had to explain my reasons for not eating pork before they made a fresh one.  Finally a new burger was made, at this point my guests had pretty much finished eating and it was time to get to the next part of our festivities.  I can’t eat that fast.  I had one bite of the burger and my husband scarfed down half of the rest.  I believe it’s normal protocol for the bride and groom to be fed first on the wedding day, or at least at the same time as the guests.  I felt like an after-thought.

The bites that I did get to have were really delicious and I can see why Hubert Keller is the king of burgers, being the first to open a gourmet burger in Vegas.  Being a foodie, I am sad that I didn’t get to enjoy my meal properly.  My guests all really enjoyed the food that they got though and that’s the most important thing.  Perhaps I’ll go back one day and try it without the craziness of a wedding.  Perhaps they are better at smaller groups.

I will say that i emailed burger bar after the wedding and voiced my concerns.  They were really apologetic and I didn’t want to hold the errors against them.  They also asked for my mailing address so they could send me a hand written apology.  A bit of time passed and I had to email them again to touch base.  Eventually they sent me one of Hubert Keller’s cookbook with a lovely note.  I do wish things went differently during my wedding dinner, but it didn’t ruin my day.  It was still the best day of my life. 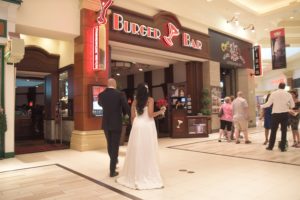 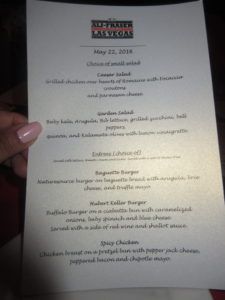 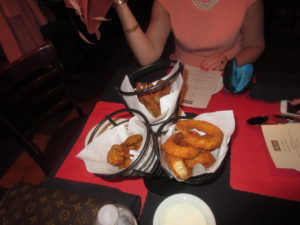 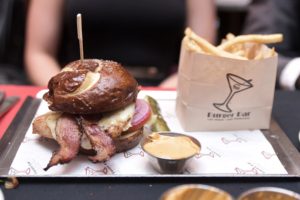